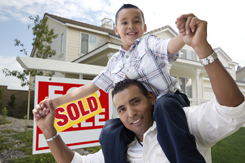 This month the National Association of Hispanic Real Estate Professionals (NAHREP) released their annual State of Hispanic Homeownership Report for 2013. A 35 page report designed to highlight “the homeownership growth and household formation rates of Hispanics as well as their educational achievements, entrepreneurial endeavors, labor force profile, and purchasing power in the United States”.

This report is full of great information and you should download it and read all 35 pages. In this blog post, I will mention a few facts that, in my opinion, are relevant to all of us:

The Hispanic community is becoming a major player in the housing market.