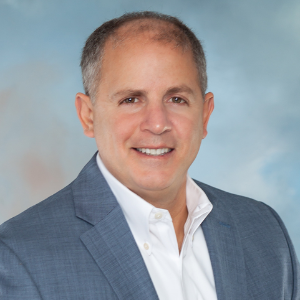 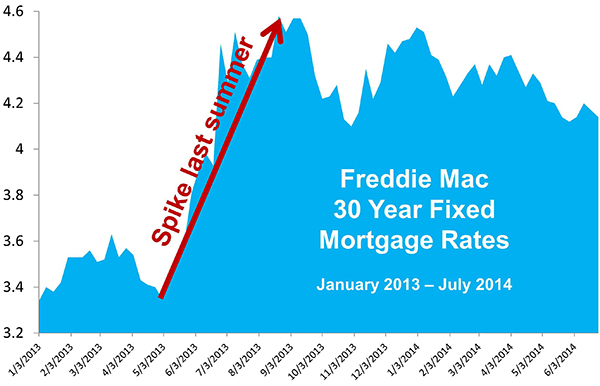 Many readers have asked where interest rates are headed over the next several months. While no one has a crystal ball, we did want to share what some experts are saying on the subject.

“For now, and likely through the summer, we may see data-driven bumps and dips in rates. Although we managed a slight dip presently, a bump is in order before long.”

“In the next few months, mortgage rates are likely to remain at their current, low level, but will not remain there for long. As the Federal Reserve is expected to ‘taper’ its purchases of long-term Treasuries and mortgage-backed securities, and as economic growth picks up, long-term yields will gradually rise. Fixed-rate mortgages are expected to be higher in six months, and may even approach 5 percent a year from now.”

“Mortgage rates could move suddenly higher in anticipation of rate increases, much as they did last summer when refinance and transaction activity was high. Steady purchase transaction volume and lower refinance volume could mean that mortgages rates may adjust in a more gradual fashion. In either case, as the economy improves—and today’s data clearly suggests it is improving—the overall trend for mortgage rates is up, not down.”

Projects the 30 year fixed mortgage rate to be 4.3% by the end of the year.

Projects the 30 year fixed mortgage rate to be 4.7% by the end of the year. 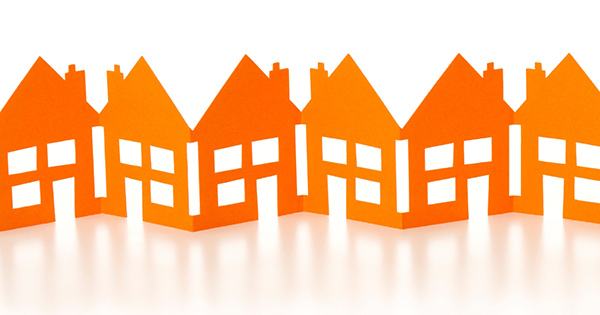 If you read certain headlines, you might be led to believe that the housing recovery has come to a screeching halt. Naysayers are claiming that the threat of rising mortgage rates and a lack of consumer confidence are keeping Americans on the fence when it comes to purchasing real estate. That is actually far from reality. After all 13,397 houses sold yesterday, 13,397 will sell today and 13,397 will sell tomorrow.

That is the average number of homes that sell each and every day in this country according to the National Association of Realtors’ (NAR) latest Existing Home Sales Report. According to the report, annualized sales now stand at 4.59 million. Divide that number by 365 (days in a year) and we can see that, on average, over 13,000 homes sell every day. If you are considering whether or not to put your house up for sale, don’t let the headlines scare you. There are purchasers in the market and they are buying – to the tune of 13,397 homes a day. 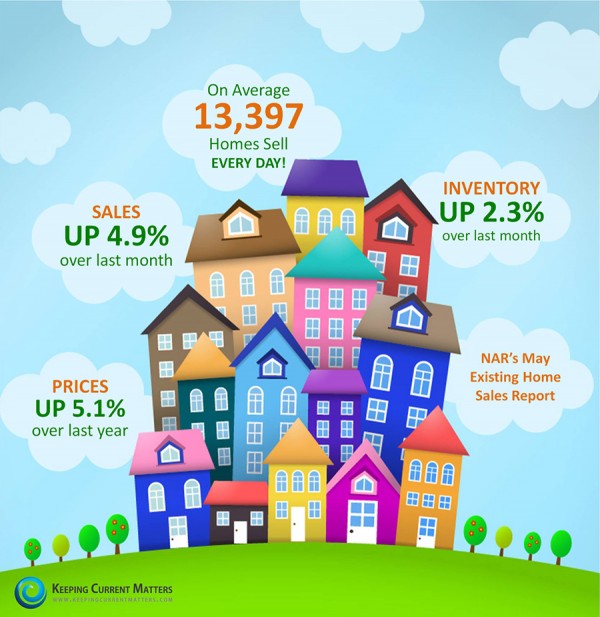 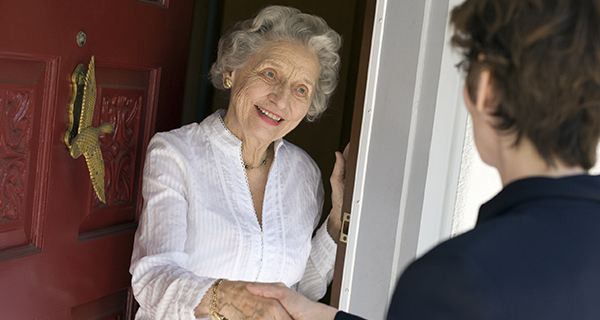 Today we are pleased to have Nikki Buckelew back as our guest blogger. Nikki is considered a leading authority on seniors real estate and housing. Enjoy!

It was her 80th birthday and as Sue’s family gathered around in celebration, she announced a major decision. After years of toying with the idea, she had come to the conclusion that now – yes, now – was the proper time for her to move into a continuing care retirement community (CCRC).

Although they were a bit surprised, Sue’s two adult children (both seniors themselves) nodded to each other and expressed relief that their mother would have access to the support and care she needed. Both admitted to a bit of worry about her living alone since their dad died, especially as they both traveled extensively and were not available to see her or care for her on a regular basis.

But, of course, they all realized that such a move would require a massive commitment of time and energy, with the first necessary step being to find a good real estate agent to help sell the longtime family home.

Sue mentioned that she was acquainted with an agent she had met at church and who regularly sent her mailings. The agent seemed quite nice and professional, had won numerous awards, was active in the community, and owned a variety of impressive-looking credentials. You know, she had a whole bunch of letters and acronyms at the end of her name.

Sue and her children arranged for a meeting with the agent, and while she was clearly competent and well-educated in her field, Sue just couldn’t get past a nagging feeling that something was amiss. The agent was nice enough, but throughout Sue’s entire life, she had tended to gravitate toward doing business only with those to whom she felt some sort of connection. Perhaps it was something she had learned from her father, a man who valued relationships in business dealings as much or more than mere competence. Not only did she want help, but she also wanted to feel a special sort of bond and trust.

The practice had served her well throughout life and now – with such an important transaction – she wasn’t about to change her approach.

Sue scanned the yellow pages, spoke on the phone with a few agents, and even met with another over coffee, but still she couldn’t find the sensation of trust and comfort she desired. She even did a couple of quick internet searches leaving her feeling confused and frustrated. It occurred to Sue’s daughter that perhaps the CCRC that was to be Sue’s new home would be able to provide a recommendation for a good agent. Indeed, they did, and that’s when she met Joe.

He arrived at her home and immediately the two hit it off. Sue hired Joe to list and sell her house and as he began to take his leave, Sue touched him gently on the arm and said «Thank you, Joe. You are different than other agents I’ve met with,» she smiled. «I don’t know exactly what it is, but I feel I can truly trust you to help me make this move.»

Sue’s home sold quickly, and with Joe’s help, she arranged for an estate liquidator to sell the belongings she no longer needed. He also arranged for a moving company to pack and transport what was needed to Sue’s new apartment at the retirement community, and made sure she was content in her new home.

A few days later, Sue’s children visited their mother, breathed a sigh of relief that everything seemed under control, that a large project was complete and that – most importantly – Mom was happy, healthy,  and safe. Her daughter (who admittedly had been a bit annoyed at Sue’s «pickiness» in choosing an agent) smiled and remarked that Sue had made a fine decision in choosing Joe to spearhead the sale and move. «But Mom,» Sue’s son asked. «How did you make your decision? Why did you choose him?»

Sue dug into her purse and drew out the list of notes she had made while interviewing Joe: 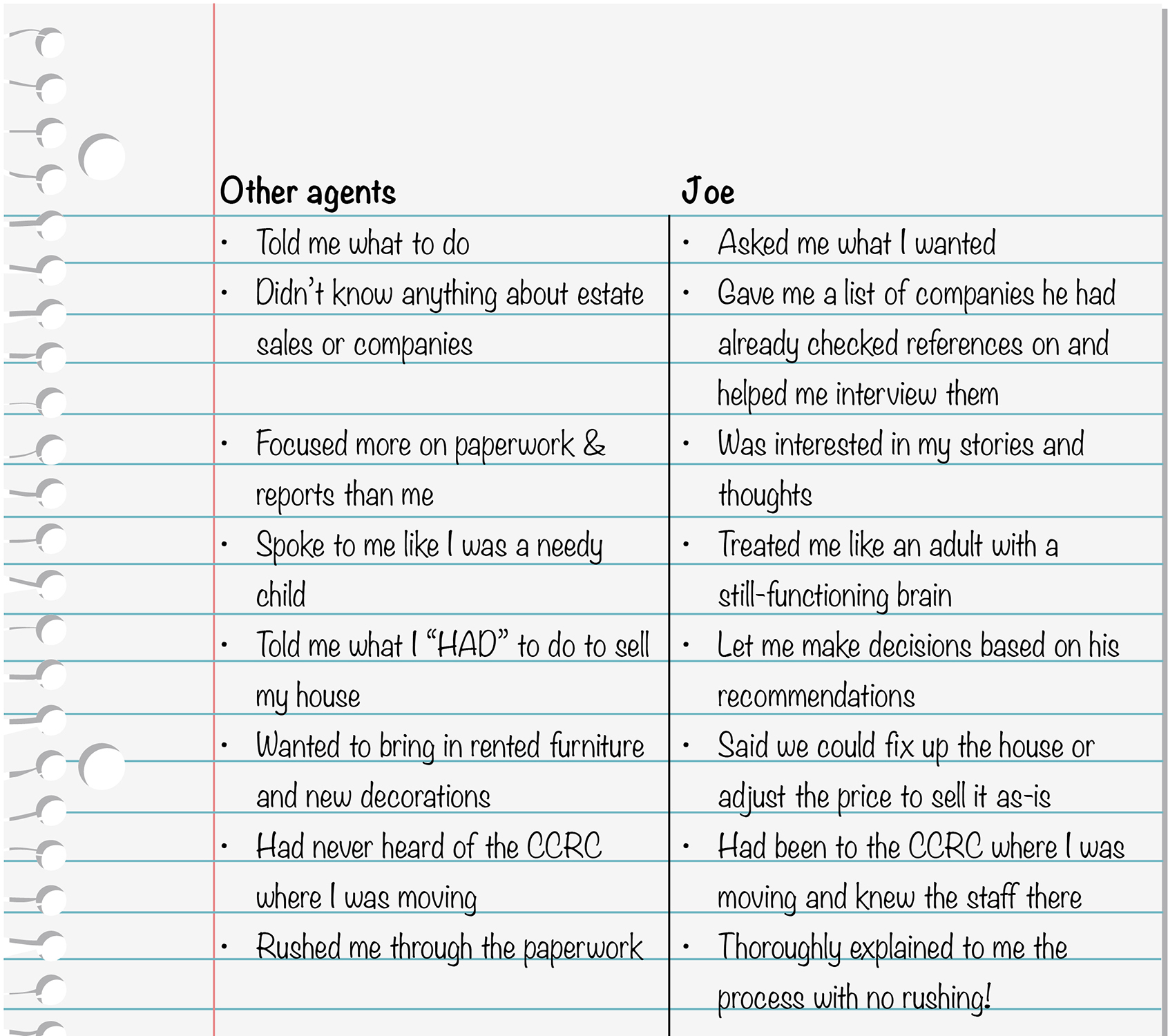 As her daughters looked at the list, Sue remarked «I felt ‘OK’ with the other agents. They were undoubtedly good at their jobs. But I wanted someone who was good for ME too.»

And thus ends the happy story of Sue, a senior whose outlook on doing business mirrors that of most of her generation, nearly all of whom value a firm handshake and «good vibes» as much as they do hard numbers and competency.

As real estate professionals serving seniors, it’s important that we understand that what makes for a great partnership, truly is in the eyes of our clients. 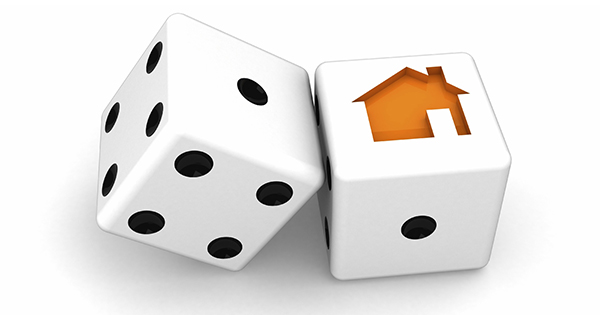 We are pleased to have KCM Founder and Chief Content Creator, Steve Harney, do a personal post today. Enjoy!

That is what a headline announced in a CNNMoney post Monday. They were quoting Karl Case “an economist whose name is synonymous with home prices. He is co-creator of the much watched S&P/Case-Shiller home price indexes with Bob Shiller, who won the Nobel Prize in economics last year.”

Case did explain that the commonly held belief that housing prices could ‘never’ depreciate was corrected over the last decade. And it is true that Case referenced a home he bought during that time had lost almost half its value.

However, there were other comments attributed to Case in the article:

He bet on three houses; one lost 50%, one gained over 400% and the other gained approximately 300%. Sounds like great odds to me.

Give me the dice and get out of my way.

[It] should be obvious why now is such an opportunistic time to buy a house. Of course, if you want to wait, that’s up to you. But doing so could very well be a source of regret later on down the road.”

Give me the dice and get out of my way.

If buying residential real estate is actually a crapshoot (as the headline claimed), it seems the odds are in the shooter’s hand.

PLEASE give me the dice and get out of my way. I really want to roll. 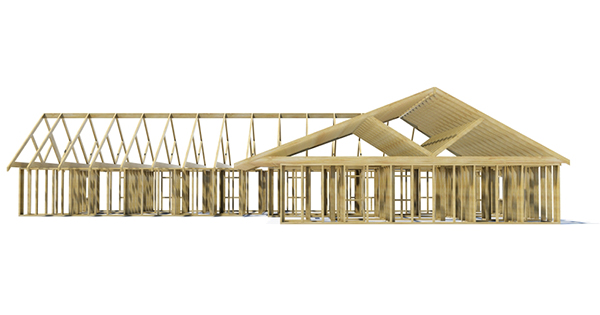 For the last several years, home sellers had to compete with huge inventories of distressed properties (foreclosures and short sales). The great news is that the supply of these properties is falling like a rock in the vast majority of housing markets. Many homeowners are now thinking of selling as the impact of this substantially discounted competition has disappeared.

However, every seller of an existing residential property must realize that there is a new form of competition about to hit the market: newly constructed homes.

As the economy improves, builders will again be bringing their housing developments to the market. Trulia recently reported that the purchaser, given a choice, actually prefers new construction. Here are two charts showing the results of the Trulia survey:

If you are thinking of selling, perhaps you should do it now to avoid the additional competition that will come to the market later this year. 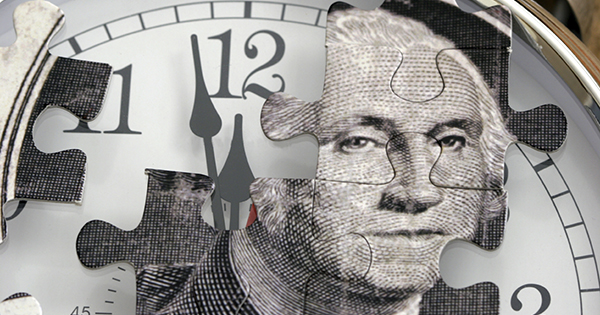 New reports are revealing that the number of months’ inventory of existing homes available for sale is increasing. Some of these sellers are moving up, some are downsizing and others are making a lateral move.

Here is a table showing what the difference in monthly cost (principal and interest) would be if a purchaser had waited:

3 dollars and 27 cents. Was it worth waiting a year to move up to the home of your dreams? Only you can answer that question.

If your family plans on moving up in the next twelve months, it may make sense to move now rather than later. Prices are definitely still appreciating and, unlike the last year, interest rates are also projected to increase. 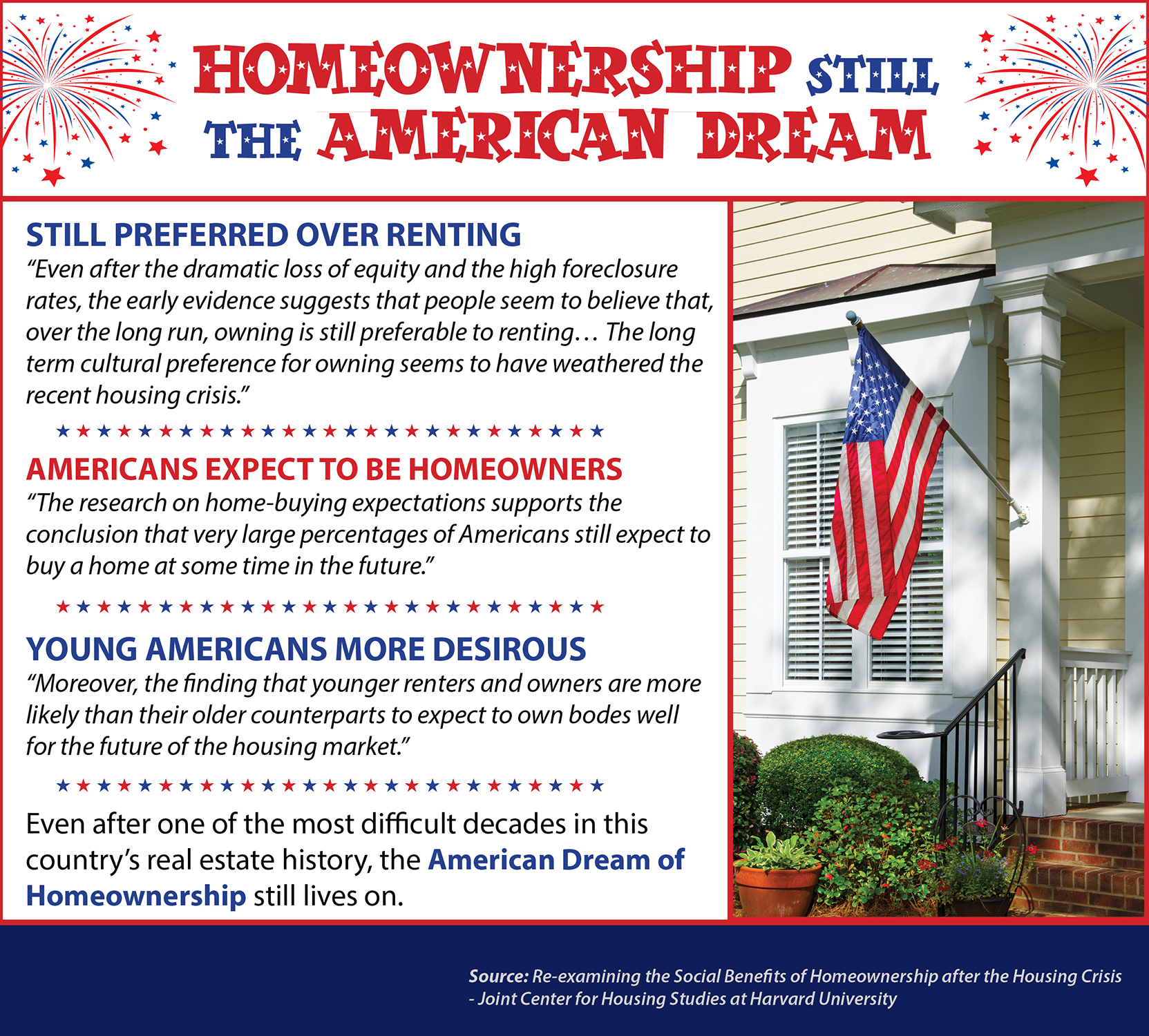 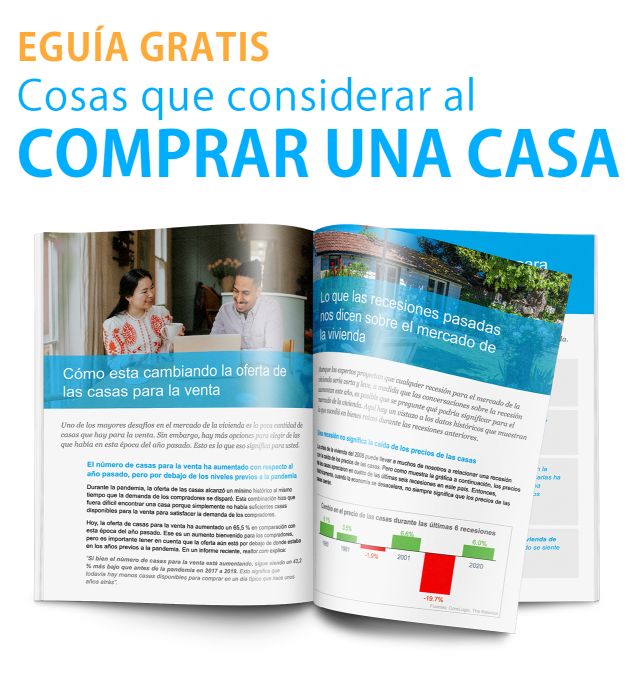 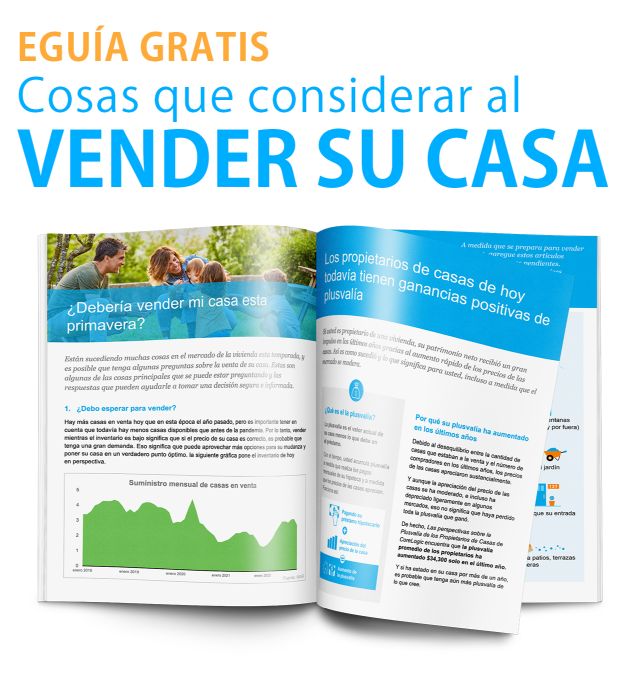